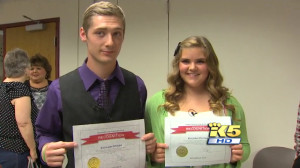 In Kingston, Washington, two siblings performed CPR, and helped save their father’s life after he went into cardiac arrest in late April.  It was a Sunday afternoon and Mark Potter, 53, had been mowing the lawn.  His daughter Kyleigh, 14, came around a corner and found her father unconscious and not breathing.  He was sitting in a chair in the yard.  Kyleigh screamed for help, and several 911 calls were made.  Mark’s wife, Suzie, and a family friend lowered him to the ground.  Zach, his 20-year-old stepson, joined Kyleigh by his side, and together they performed life-saving CPR until paramedics arrived.  Ten days later, Mark walked out of the hospital, and is doing great today.

Just two weeks prior, Kyleigh had been practicing CPR in her ninth grade class at Kingston High School.

It’s stories like these that keep us going, hoping to bring our program to every high school student across the country.

We’ve recently learned that one of our students was also involved in a life-saving situation.  We’re anxiously awaiting the details of that event, and hear that it’s going to be written about in a newspaper in the city that it happened.  We’re excited to see that our efforts to bring CPR to high school students have already paid off with a life saved, and we’ll tell you all about it as soon as we can!