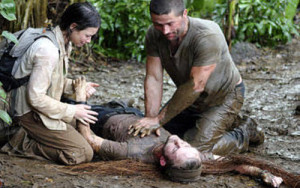 But not on its own.

The truth is that CPR is meant to extend the opportunity for professional medical services to arrive and take over; CPR on its own has an abysmally low rate of efficacy if unaccompanied by calling 911 or at least using an AED (Automatic External Defibrillator).

The thing is, nobody told Hollywood.

As a result, movies and television are rife with portrayals of CPR being some miraculous cure-all for what Miracle Max would describe as being “mostly dead.” Let’s walk through some of them.

Catching Fire, the second installment in the Hunger Games trilogy (Or quartet, I guess, if you’re going by the movies.) continues the theme of the first book which involves Peeta either gazing longingly at Katniss or being nearly dead most of the time. This instance, featured pretty early in the second set of games, involves Peeta’s heart stopping due to electrical shock. Finnick, a guy who’s really good at swimming, actually does a decent job of imitating CPR. Check it out.

Like I said, surprisingly good imitation. Especially for Hollywood. Note, though, that his compressions are not nearly deep enough, especially not when you account for the thick material of those fantastic suits they’re all wearing. Compressions should be about two inches deep into the chest: after all, we’re trying to pump an adult male’s heart with our hands. It’s gonna get messy. Bring your elbow grease.

Pardon the language on this next example of miraculous (and poorly delivered) CPR, but neither I nor James Cameron can be held responsible for the raw passion that Ed Harris brings to the table.

Look at his piercing blue eyes. Still upset? I thought not.

Just for conversation, let’s ignore the ending where Ed Harris’ lung capacity, belief, and forehand slaps to the face cause a woman’s heart to resume beating. Not because it’s scientifically implausible and a terrible idea, but because I’m still choked up about it.

Thanks. Anyways, did you see his compressions? His form looked decent, but he was going much too slowly. You want a rate of 100 compressions per minute, and the standard is to do 30 of them before attempting a breath. Harris did about ten before breathing, but that’s much less an issue than the slow compression rate. Something he did right, though, is incorporate an AED. Those things have a much better chance of actually saving someone than CPR on its own: remember, CPR isn’t meant to revive a person. It’s only meant to prolong their “mostly dead” state until a professional arrives.

That professional may or may not begin slapping the unconscious person in the face. It’s science.

3. An Officer and a Gentleman

Since this article is about CPR, though, let’s shift gears to Sergeant Foley. Richard Gere has nothing to do with it.

See? He wasn’t in there.

To talk about the clip, though, there isn’t a whole lot to say. I’m not sure where Foley learned his unique positioning of the hands, or why he delivers his compressions to the lower rib cage, or even why he does a Bruce Lee windup for every thrust. I can’t answer those questions.

I can answer the question of whether or not this should have worked, though: absolutely not. Don’t do this to a person. Richard Gere will be disappointed in you if you do, and so would the person you were trying to help (except they won’t be around to voice their disapproval).

LOST, right? Man, what a great show if you ignore the last half of it. This scene comes from the eleventh episode of the show, where Charlie is found unconscious with no heartbeat. It does a great job of characterizing both Jack and Kate, framing their personalities and the trajectory of their relationship. Especially…

Look at Jack’s positioning. He could be a little more directly above Charlie’s chest, but his arms look decently straight and his jawline is impeccably masculine. If he did center himself a little better, though, maybe he would be able to muster the strength to depress Charlie’s chest even a little bit.

Seriously! We’ve talked about this, Jack: you can’t be a surgeon and also have no concept of how to do a chest compression. Oh, sure, after your Vick’s Vapor Rub application had no effect you start wailing on his chest (which, also, is a terrible idea), but until your 30 odd seconds of precordial thumping I was wondering if maybe Charlie was only sleeping.

Maybe Charlie was wearing his favorite shirt? Jack is sensitive to things like that, and wouldn’t want to strain the material.

Spoiler: Charlie actually pulls through, warranting his inclusion in this article. He explodes into consciousness a few seconds after the clip ends, though exactly WHY he comes to is a little confusing. Maybe for the same reason there are polar bears on the island.

So far I’ve been showcasing bad CPR, giving Hollywood a bad name, and betraying a serious personal problem that involves heavily investing in fictional characters. It’s been fun. To provide a balanced look, though, I decided to include this example.

It has nothing to do with the fact that I love this movie. Honest.

Back to the Future – Part II, Marty gives Biff CPR

While there are the rare few instances where movies and television get CPR right, the vast majority will only mislead you if you rely on them for your CPR education. You might one day respond  to an emergency situation and, panicking, pummel a cardiac arrest victim’s face.

Ed Harris would be proud.