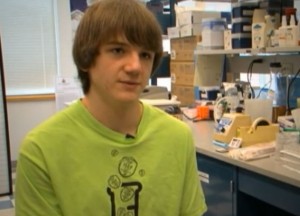 Check out this short video about a 15 year old high school student named Jack Andraka, from Maryland, who recently won $75,000 at the Intel International Science and Engineering Fair for his pancreatic cancer test that is “168 times faster and considerably cheaper than the gold standard in the field.”

Did you catch how the idea came to him?…”chilling out in biology class”.

So don’t ever feel like you can’t do something because you don’t have all the information…Jack found and did all of his research by googling free online scientific papers.

And did you hear that? He wanted to know more about cancer after several members of his family were struck with it.

Don’t be afraid to take the first steps to start moving towards whatever that is…and don’t ever use the excuse that you’re too young to make a difference.

Jack may be credited with helping to save the lives of millions of people through this simple test he created…and he’s only 15!

Don’t be afraid to step out.

What would you do if you knew you could not fail?